Should I study an MBA?

Looking for something specific?

Which choices make MBAs the most money?

A quick guide to financing your international MBA

The pressures are real, but MBA salaries are measurably high. In some cases, they are incredibly high.

If you want a figure that’ll blow your mind, a 2016 Harvard Business School graduate accepted a $500,000 annual salary (excluding bonuses).

This remarkable salary isn’t the norm, of course, but you can expect a salary boost when you pursue an MBA. And many newly minted MBAs push salaries over six figures.

But, your MBA salary depends on a multitude of factors:

Which choices make MBAs the most money?

With all these variables, it’s worth considering all the options on the table, from specialisation and field to the country and school you choose to study in.

According to Monster.com, the 7 highest-paid MBA specialisations are: 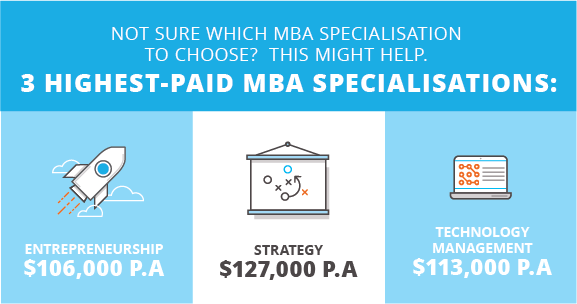 If you’re looking for a school with solid salary offers post-grad, you might be interested in the latest estimates from Emolument. Take a look at the average salaries for MBA graduates of these schools:

The Wharton School University of Pennsylvania

With all those American programmes listed above, you might be tempted to believe that the MBA jobs in the United States claim the highest average salaries.

Not so. According to Top MBA, top honours actually go to Switzerland. The top 10 countries for MBA salaries are:

In the United States, any university that receives federal financial aid funds is required to post their annual Cost of Attendance clearly, so finding this information online is usually a painless process.

It’s a different story in Europe where it’s difficult to track down estimates, even for a few prominent schools.

Cost of Attendance (CoA) sums all expenses associated with your education. That’s tuition, required fees, books and study materials, rent, food, transportation, and, often, much more than that.

How do schools calculate the Cost of Attendance?

The obligation American schools have to post CoA, doesn’t mean they use a standardised calculation.

Tuition is the only universal line item across different schools, as a quick look at a couple of published CoA tables will tell you.

The figures above are all for the first academic year of two-year MBA programmes (for single students staying in basic accommodation).

And, yes, those are the figures for an academic year, which is nine months and applies to most schools. (Stanford GSB has a ten-month academic year.)

What you do for the other couple of months is a little tricky to deal with - especially if you’re participating in an internship in another city (and need to pay rent in two places) or you’re taking a couple extra classes to boost your academic record.

You may also be struck by the high figures for health insurance for these schools - and that NYU Stern includes these costs under the heading “miscellaneous”.

You may also be curious as to why the Cost of Attendance at NYU Stern is roughly the same as the CoA for Columbia - even though they’re both situated in New York City, and the Columbia tuition fees are higher than NYU Stern’s fees. It all boils down to the extras each school provides.

The Cost of Attendance is often worked out differently in Europe. Oxford’s Saïd Business School provides a breakdown similar to the American calculations (though we already know there are differences on that front).

But, you’ll find programmes like IESE and ESADE (both in Barcelona) provide tuition and then a monthly estimate for living expenses. Tuition covers the entire 18 or 19 months of study, but you’ll need to work on a figure of €2100 per month as an estimate to work out the CoA you’ll need to prove to immigration authorities.

And, over at London Business School, the school doesn’t explicitly provide living expenses on their main website, but they have surveyed students in the past to determine general costs. The average, by the way, is £2395 per month.

Why all the emphasis on Cost of Attendance?

If you’re planning to study in the United States, your university will provide you with an I-20 form once you’ve demonstrated your ability to cover the costs. You won’t get the form until you can show the school you can meet the figures - and you can’t submit your visa application or schedule your interview without this form.

Prodigy Finance also works with the Cost of Attendance provided by schools when offering loans*.

There are exceptions, however. Prodigy Finance can extend loans to ESADE MBAs equal to 100% of tuition; while others allow for 90% of the CoA.

At the University of Pennsylvania’s Wharton School of Business as well as at Stanford’s GSB (two of the priciest MBA educations), Prodigy Finance can extend loans up to 90% of the CoA provided by the school.

*Each Prodigy Finance loan is, of course, determined by multiple factors - and it’s important to read through all terms and conditions before applying for any loan.

What does Cost of Attendance mean for your budget?

A quick look at the Cost of Attendance figures provided by the school, or, in the case of European schools, worked out according to average monthly spend should tell you a few things.

Primarily, living expenses in different cities will radically change your budget - as will the length of your MBA programme.

If you consider the CoA at Oxford Saïd (provided by the school) versus the CoA for LBS (which is partially a guess based on the spending habits of students), you’ll find a staggering difference in price. Partially, it’s due to the high cost of living in London, and partially because Oxford’s MBA programme is 12 months and not 18 as you’ll find at LBS.

The difference in tuition between IESE and ESADE business schools accounts for the price differences between these Barcelona programmes.

Over in the US, it’s easy to see how area affects budget. It’s more expensive to live in New York or California, Chicago or Boston. Head to schools like the Ross School of Business at the University of Michigan and you’ll pay lower tuition fees, and your living expenses drop as well.

How accurate is the Cost of Attendance provided by schools?

Okay, tuition, mandatory fees, and often health insurance figures are pretty solid. (Though you do need to factor for increases and ensure your health insurance covers a 12-month period, not just an academic year.) And, if campus housing is available, you can work out many of the major costs with some accuracy.

But, you’ll need to make some serious choices when it comes to your budget for eating out (almost essential for bonding with your classmates), participating in clubs (which are often pathways to a job offer), and the type of transportation you’ll use (just remember how cold Chicago or New York can be).

As such, the Cost of Attendance provided by schools in the United States isn’t necessarily more accurate than the estimated living expenses given for schools in Barcelona.

And, missing from all of this are the costs of academic excursions and flights to interviews. Most costs ignore living expenses during internship periods - and you don’t necessarily know where you’ll be for those few months. It could be in Cape Town or Los Angeles - and the cost of living in these cities is vastly different.

While a solid Cost of Attendance is critical for obtaining your international study visa, it’s only helpful when it comes to your MBA budget.

No matter what the school provides, you'll still need to crunch the numbers and work out your own living expenses.

Cost of Attendance isn’t your budget.

Cost of Attendance (CoA) is critical for international students. It includes tuition, fees, books, medical insurance, and everything you need to live during your studies - and you'll need to prove you can cover these costs to secure a visa.

Although universities publish CoA figures – even if it’s just tuition and the lowest possible amount they believe a student can survive with – it can be tough to compare apples to apples.

Costs are given in local currencies – pounds, euros, rupees, yuan, and dollars (that includes American, Canadian, Australian dollars as well as Hong Kong and Singapore dollars). That alone is enough to set your head spinning – and it gets more complicated when you try to work out your return on investment (ROI).

Even if you consider only European schools – and only those that charge in euros, you’ll still need to convert the amount to dollars to estimate your ROI.

If you’re bringing euros or dollars to the table, it’s doable, but when you factor in a third home currency, you’re in for some serious head scratching. (Usually, you’ll find way more zeros than you want to see.)

Calculating ROI demands that you consider the cost of attendance + opportunity costs (including the duration of your studies) + loan interest (less any monies saved or awarded as scholarships) and weigh that against earning potential.

Of course, you don’t know your earning potential when applying to various schools.

Then, we’ve taken a look at the weighted three-year salary for each university, as reported by the 2020 FT World MBA Rankings – as well as their income increase percentage (so you can attempt to work out your future salary range based on your current one).

In the end, most of the figures are estimates only, but they’re a great jumping off point for calculating your ROI – and for piecing together your starting budget. Use the ROI calculator below to get a personalised idea based on your choices.

* For 2-year programmes, the cost for year one has been doubled

A quick guide to financing your international MBA

A fully loaded Mercedes S Class. A summer home in Costa Rica. A modest personal aircraft. These are just a few of the things that could be purchased with the tuition required for a two year MBA degree.

Clearly this is no small amount. Nonetheless, every year, students who decide the returns of a top level business school education outweigh the expense, must ask themselves the same question: where will the money come from? This is a pressing question for international students in particular, as they face additional challenges in seeking out institutions that are willing to lend across borders.

From student loans, to various grants and fellowships, scholarships and work study, there is certainly an array of financing options available to high caliber students. However, not all of these were created equal, and not all students have access to each category. Let’s take a quick look at the pros and challenges of each:

Already figured out your budget and the CoA for your MBA?

It's time to secure the financing you need to pursue your MBA. Prodigy Finance offers loans for international students pursuing their masters at top universities.

TAKE A LOOK AT the B-SCHOOLS ACCEPTing PRODIGY FINANCE LOANS